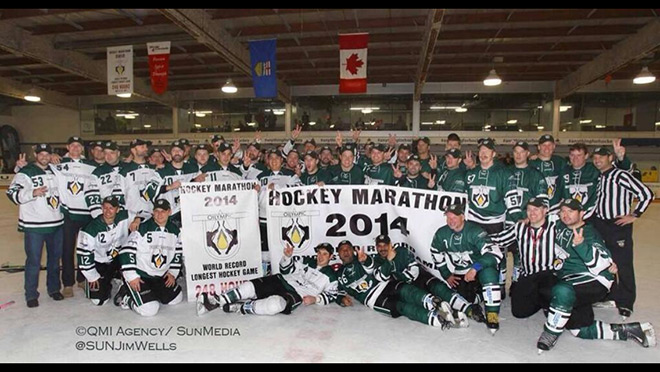 Calgary, AB (May 16, 2014) Marc Johnson, vice president of sales and marketing, participated in this year’s Hockey Marathon for the Kids, which raised over $2 million dollars for brain tumor research at the Alberta Children’s Hospital, Southern Alberta Flood Relief, and Samuel’s Ride for Rescue. The Hockey Marathon for the Kids is an 11-day hockey game played nonstop for 248 hours by 40 men, in four hour shifts at the Chestermere, AB arena. Players were not allowed to leave the arena for the duration of the event, and all the amenities the players needed – a cot to sleep on, an ice bath during shifts – were provided onsite. With an average of 1,800 people visiting the arena each day, you could say this year’s event was a successful one. The event was under the watchful eye of Guinness World Records, as the player’s also broke the record previously set in Chestermere in 2012.

"The experience was truly amazing. To see 40 guys get together for a common cause, and sacrifice their bodies, their family life, their sleep patterns, and their work schedule was a privilege to be a part of. It was humbling to see our small sacrifice have such a huge impact on the community, and the lives of the kids and families our fundraising supported. It took me a while to get back to “normal”, but it is an experience I will cherish for the rest of my life. Thanks to STEP and all the support I received from our team here for giving me the time to help make it happen!"

Marc finished the game with 174 goals, 283 assists, for a total of 457 points and 10 penalty minutes. He also tended goal for a total of eight hours, with 191 goals against, and an average of 23.88 goals per hour against.