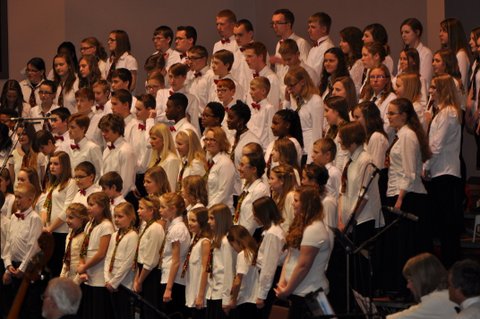 Over the weekend of December 12, 2014 Tony Cave, one of STEP's electronics professionals, was involved in a fundraising event with the Central Alberta Homeschool Choir and the Rosedale Valley String Orchestra to support the Christian Life Orphanage in Mwanza, Tanzania.  The Central Alberta Homeschool Choir includes over 100 children and youth from Red Deer, Lacombe and Camrose, led by musician Debbie Zepick. The Rosedale Valley Strings is an orchestra made up of approximately 40 youth led by the principal violinist from the Red Deer Symphony Orchestra, Naomi Delafield.

Prior to getting Western support, the orphanage, led by a couple in Mwanza, consisted of a three bedroom home housing up to 30 less fortunate boys. Over the last six years, the Central Alberta Homeschool Choir and the Rosedale Valley String Orchestra have raised enough funds for the orphanage to purchase a plot of land which now houses a larger building to accommodate those in need. This, along with ongoing monthly support, has helped the orphanage provide food, clean water and schooling to the children of Mwanza, Tanzania.

Tony Cave and his family are all actively involved in this fundraising effort; Tony’s wife is the pianist for both groups, and his children are involved with both the choir and the orchestra. Not only does Tony help with the fundraising efforts, but he also gets to be on stage at all of the performances as the honorary page-turner for the pianist!

This year the Central Alberta Homeschool Choir and the Rosedale Valley String Orchestra joined forces for three performances in Red Deer, Clive and Camrose, and were able to raise over $38,000.